OPA Call to Delay Expansion of MAiD for Mental Disorders

Medical Assistance in Dying (MAiD) is scheduled to expand in March 2023 to include cases where mental disorder is the sole underlying medical condition (MAiD MD-SUMC).

In May 2022, the Canadian Expert Panel on MAID and Mental Illness released its final recommendations "with the recognition that more work will need to be undertaken by other actors – regulators, professional associations, and institutional committees – who have the content expertise to develop specific guidelines for practitioners." The report proposes that incurability and irreversibility of mental illness be assessed on a case-by-case basis.

An expert group formed in September 2022 is tasked to develop MAiD practice standards is still working on initial drafts and consultations, and forecasts completing a report by February 2023. Federally funded physician training on MAiD for sole mental illness remains to be completed and launched.

The OPA calls to delay the expansion of MAiD for mental disorders. Without sufficient time for consultation, development of evidence-based recommendations and safeguards, and availability of provider training, the expansion of MAiD by March 2023 may be premature. This implementation demands an approach of utmost sensitivity and integrity, with robust scientific and ethical guidance, and considerations of structural vulnerabilities disproportionately affecting those with mental disorders.

Dec 1, 2022: the Globe and Mail highlights calls for delay of expansion of MAiD by organizations including the OPA

OPA Statement on the War in Ukraine

The OPA has been following the evolving war in Ukraine and wishes to express support to the innocent people being impacted by it. We stand with the people of Ukraine and condemn this act of war.

Madiha and Salman Afzaal, their 15-year-old daughter Yumna, and her paternal grandmother, Talat, 74, were killed when a driver ran them over in a pick-up truck on Sunday, June 6, 2021 in London, Ontario. The couple’s nine-year-old son was taken to hospital with serious injuries. The family had been out for their nightly walk after dinner when a driver decided to murder them in a hate-fuelled Islamophobic attack.
Islamophobia is not new to Canada. It is embedded in this country’s colonial legacy, policies, media and political discourse. It is a lived experience for many in this nation, especially those who are visibly Muslim such as Muslim women who choose to wear hijab or those who are mistaken for being Muslim such as Sikh men who don a turban. The bullying, intimidation, harassment, threats to people and places of worship and outright banning of the hijab, niqab and other religious symbols for employees in the public sector in Quebec has resulted in deadly violence. There have been numerous incidents of hatred against Muslims with fatal consequences including the murder of a mosque volunteer in Ontario last year and the Quebec City mosque massacre during evening prayers which left 6 Muslim men dead on January 29, 2017.
Anti-Muslim hatred cannot be de-coupled from violence being perpetrated against Indigenous, Black, Asian and other racialized and marginalized populations. Islamophobia is yet another manifestation of systemic oppression and colonization.
The Ontario Psychiatric Association strongly condemns Islamophobia, anti-Muslim hatred and all forms of racial and religious discrimination. We also call for more work to dismantle the systems that perpetuate this level of violence against these populations and advocate for an expansion of culturally tailored resources, cultural safety and greater compassion in our profession.

As psychiatrists and healthcare professionals, the OPA champions equitable access to mental health support and services. Our Ontario population is diverse, with 29.1% of the population being immigrants, 3 in 10 being of visible minority backgrounds, and over 3.8 million people whose mother tongue is other than English or French. The Mental Health Commission of Canada has noted that many immigrants, refugees, and ethnoracial groups in Canada continue to encounter barriers towards seeking and obtaining psychiatric help, including challenges in provider-patient interactions, service accessibility, and language barriers. In Ontario, data has specifically highlighted disparities based on ethnic differences in mental illness severity and service utilization.

One of the Mental Health Commission of Canada's strategic directions includes a focus on improving mental health services and supports for immigrant, refugees, ethnocultural and racialized groups (IRER). A concerted effort is needed across social and healthcare sectors to address the underlying racism, discrimination, and other structural inequities impacting on the health and well-being of the diverse populations we serve.

Cultural competence and cultural safety are paramount to meeting these challenges at clinical, organizational, and systemic levels. This includes promoting training in anti-oppression, anti-racism, cultural competence, and cultural safety; enacting healthcare policies that promote equitable access and care; and developing mental health practices, programs, and services that are responsive to the cultural and linguistic needs of the diverse communities, including ethnospecific programs.

Some longstanding cultural and linguistic-specific mental health services have been developed for various culturally diverse populations, with some numbering in the hundreds of thousands in Ontario. These collaborative, multidisciplinary clinics have served their respective communities by using a team-based approach and engaging in hospital-community partnerships. As an efficient and exemplary model of care, these best practices need to be protected, promoted, and adapted for other diverse populations, tailored for their specific needs and grounded in their local communities.

The OPA has become aware of expressed concerns from communities that some of these clinics in the province have already been closed or are in the process of being restructured or shut down. As these types of programs are uniquely designed to deliver services to underserved populations, they are also the most vulnerable to restructuring changes and cuts due to their relative lack of visibility, support, and active championship. With race-based violence on the rise, the loss of safe spaces and vital culturally-concordant treatment supports for marginalized populations will only further compound suffering.

From a system perspective grounded in equity, diversity, and inclusion principles, the OPA advocates for continuous commitment, investment, and support for culturally-competent programs throughout the province, as we must work in solidarity towards addressing the mental health needs of all Ontarians.

In the face of brazen acts of violence against North Americans of Asian descent including the horrific shootings in Atlanta, the OPA strongly denounces anti-Asian racism and discrimination in all of its forms.

While there has been a long history of anti-Asian racism and systemic inequities dating back to the founding of Canada as a nation, it has often been masked by the model minority myth. With the pandemic, Asian communities have been blamed and treated as foreigners. Anti-Asian discrimination and hate crimes have dramatically increased, including violent attacks against women and the elderly.

In 2020, a national survey found 50% of Chinese Canadians were insulted because of the pandemic, and 43% were personally threatened or intimidated. The Chinese Canadian National Council of Toronto documented 1150 cases of racist attacks from March 10, 2020 to February 28, 2021 reported through web portals, with about 40% of the cases being from Ontario. Alarmingly, about 11% of the attacks involved violent assault or unwanted physical contact and about 10% involved being coughed on or spat at.

We recognize the tremendous destructive impact that racism has on the safety, mental health, and wellbeing of Asian individuals and communities. This is especially concerning in the context of unmet mental health needs for Asian Canadian populations, including poor access, language barriers and insufficient services, leading to significant mental health disparities in Ontario.

As psychiatrists and mental health professionals, the OPA stands in solidarity with Asian communities. We call for anti-stigma advocacy and initiatives, individually and collectively; support for culturally competent mental health care for diverse communities; and an end to all forms of xenophobia, racism, and discrimination.

Dr. Renata M. Villela, OPA President, and Dr. Javeed Sukhera, OPA Past President, participated in a media briefing about the impact of the COVID-19 pandemic on mental health. Portions were featured on CP24 at: https://www.cp24.com/video?clipId=2126513 and in The Globe and Mail here.

Dr. Yusra Ahmad, OPA Council Member, was invited to take over @TransplantCTV's Twitter and IG accounts that day to share her innovative work on Mindfully Muslim.

The Ontario Psychiatric Association (OPA) unequivocally condemns all forms of anti-Black Racism and stands in solidarity with those standing up and speaking up about the injustices faced by Black, Indigenous, and People of Colour in Ontario, Canada, and the Global Community. Psychiatrists have an important role to play in addressing the disproportionate impact of violence and coercion on patients of colour. We must not only acknowledge and reckon with the impact of systemic racism on our most vulnerable and marginalized patients, but we must also rise up and do the work to dismantle oppressive structures and work towards a more just and equitable healthcare system. The OPA is committed to addressing the issue of equity, diversity, inclusion, and belonging through words and deeds as we move forward as a profession and as a community.

On behalf of the OPA Council, 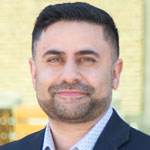 Ontario Psychiatric Association is delighted to welcome Dr. Javeed Sukhera to the position of President for 2019.

"Dr. Javeed Sukhera is Interim Chair and Assistant Professor, Division of Child and Adolescent Psychiatry, Department of Psychiatry the Schulich School of Medicine and Dentistry at Western University in London, Ontario, Canada where he is also the Senior Designate Physician Lead for Child and Adolescent Psychiatry at London Health Sciences Centre. He completed his honours bachelor of science degree at Trinity College at the University of Toronto and medical degree at the Medical School for International Health (MSIH), an innovative collaboration between Columbia University and Ben-Gurion University in Israel that provides a four-year MD program with an emphasis on global health. He completed his residency in psychiatry and fellowship in child and adolescent psychiatry at the University of Rochester."