On the evening of April 26, 2021, OPA members, supporters, and guests joined us to mark the close-out of our 100-year anniversary. This virtual event was a unique opportunity to learn about our advocacy initiatives and various developments in the areas of mental health/addictions, to meet and to interact with the team behind the acclaimed CTV/NBC medical drama TRANSPLANT, to listen to poetry, and to visit our art exhibits. The keynote address was delivered by Hon. Michael A. Tibollo, Associate Minister of Mental Health & Addictions.

This event was open to everyone and was free thanks to the generosity of our sponsors.

To view the event, click on the link below. 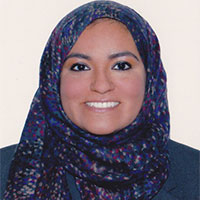 Dr. Ahmad created Mindfully Muslim after she witnessed the impact of repetitive trauma on her community, beginning with 9/11 and culminating in the Quebec City mosque shooting. Mindfully Muslim is an anti-oppressive, trauma-informed, faith-based group therapy program that blends her interests in mindfulness, neurobiology, poetry, self-help, psychotherapy, and religion. It is currently being run at Women's Health in Women's Hands, a community health centre in Toronto. Because of this work, Dr. Ahmad was honoured with the 2019 Ontario Psychiatric Association’s Breakout Community Advocacy Award.

Dr. Ahmad loves to live in between the lines because she believes a lot of power and beauty springs from these liminal spaces.  She cares deeply about people and their stories. 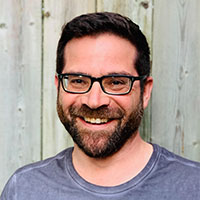 Joseph Kay is a writer and creator of series television, most recently of the NBC/CTV drama series TRANSPLANT (airs globally) and the CBC drama THIS LIFE. Previous credits include the WW2 drama BOMB GIRLS for Global TV and CBC's hit action/comedy REPUBLIC OF DOYLE. Joseph co-created the single-camera comedy LIVING IN YOUR CAR for HBO Canada. Before becoming a screenwriter, he worked as a transactional lawyer at one of Canada’s foremost securities law firms. 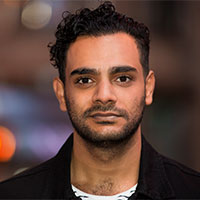 Named one of Canada's Rising Stars by The Hollywood Reporter in 2017, Hamza Haq stars as Bashir 'Bash' Hamed in the acclaimed CTV/NBC medical drama TRANSPLANT. The series centres around an ER doctor who fled his native Syria to come to Canada, where he must overcome numerous obstacles to resume a career in the high-stakes world of emergency medicine. In 2018, Hamza appeared alongside William Shatner and Russell Peters as twins Amal and Gopal in the CTV mini-series INDIAN DETECTIVE and earned critical acclaim as Raza Ali in the CBC drama THIS LIFE, for which he earned a 2018 Canadian Screen Award Nomination for Best Guest Performance. Other notable credits include recurring roles on the Cinemax series JETT opposite Carla Gugino, QUANTICO starring Priyanka Chopra, and THE ART OF MORE with Denis Quaid and Kate Bosworth.

Hamza is a 2020 recipient of RBC's top 25 Canadian Immigrants Award and partnered with the Canada Media Fund's MADE campaign as ambassador to celebrate Islamic History Month. He spoke at the TEDxTORONTO Fall digital event series 'Uncharted' using his public platform to speak on issues important to him, including refugees' rights, racial injustice, and combating stereotypes. He was honoured as Playback's Breakout Star of the Year. Raised in Ottawa, Hamza is the youngest of four siblings born in Saudi Arabia to Pakistani parents and has called Canada home since 2000. He holds a Bachelor of Arts in Film Studies with a minor in Law from Carleton University. 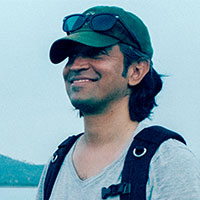 Sami Khan is an Oscar-nominated filmmaker whose work has been supported by the Sundance and Tribeca Film Institutes, Rooftop Films, IFP, the Berlinale, and the NBC/Universal’s Directors Fellowship. His films have screened at leading festivals including Tribeca, Toronto, Hot Docs, and Mumbai. Sami’s feature documentary THE LAST OUT (with Michael Gassert) won a Special Jury Prize at the 2020 Tribeca Film Festival and the Audience Award at the 2020 Hot Springs Documentary Festival. The verite documentary tells the harrowing tale of three Cuban baseball players and their dangerous journeys to the United States. The Hollywood Reporter called THE LAST OUT “a powerful true story of athletics and exile.” 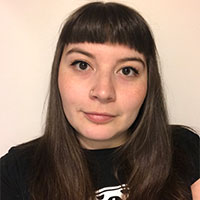 Nicole Neidhardt is Diné (Navajo) of Kiiyaa'áanii Clan on her mother’s side, a blend of European ancestry on her father’s side and is from Santa Fe, NM.  She has a BFA from the University of Victoria and completed her MFA at OCAD University in Toronto, ON.  Nicole’s Diné identity is the heart of her practice, which encompasses installation, illustration, painting, and large-scale murals.  She has a vibrant community arts practice that began in Victoria, BC.  Her passions now are in the fields of Diné storytelling and Indigenous Futurisms.  She is the co-founder of the Innovative Young Indigenous Leaders Symposium, the Groundswell Climate Collective, and has released a children’s book she illustrated written by Monique Gray Smith titled, When We Are Kind. 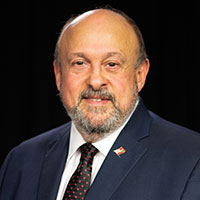 Prior to taking office, Minister Tibollo volunteered as a certified addictions counsellor and advocated for Caritas - a residential, therapeutic community seeking to help those facing mental health and addictions challenges.

Passionate about helping those faced with mental health and addictions challenges, Minister Tibollo is pursuing his PhD in Clinical Psychology with a focus on Addictions and Concurrent Disorders through the University of Southern California.

Minister Tibollo proudly serves the people of Ontario as the province’s first Associate Minister of Mental Health and Addictions and is looking forward to creating a connected system of care with comprehensive wrap-around services so that every Ontarian can be fully supported in their journey toward mental wellness.